The sequence of Tenses! 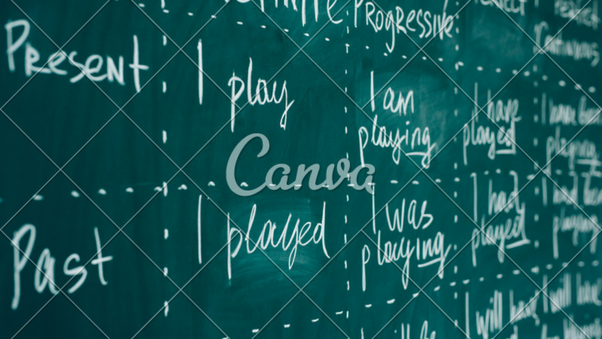 All languages have a way of keeping the meaning of a statement clear. If we are talking about something that someone told us yesterday, we can make it clear whether he told us about something that had already happened, or if he reported what happened to him at the time of his report or what he expected to happen the next day. This is the sequence of tenses: the following of one statement to another, the making sense of the expressions of time in the sentences. From now one when we say tense, it means the time (in the present, past, or future) expressed in the verb.

English has only two tenses which are shown by changes in the verb alone, present (as in “he sings”) and past (as in “he sang”). Other English language tenses are marked by other words called “auxiliaries”, or helping words.

If you understand six basic tenses you will be able to re-create much of the reality of time in your writing. The six are:

The tense of a verb in subordinate clauses changes in accordance with the tense of the verb in the main clause.

1. THE FIRST RULE USUALLY CAUSES NO PROBLEM TO ENGLISH LEARNERS.

If the main verb is in the present tense, he is speaking to me now and:

He says that his brother is sick.

He is informing me NOW that his brother is sick NOW

He says that his brother was sick.

He is informing me NOW that his brother WAS sick yesterday

He says that his brother will be sick.

If the main verb is in the future tense, I predict that::

He will say that his brother is sick.

He will inform me that his brother is sick AT THE TIME HE TALKS TO ME.

He will say that his brother was sick.

He will inform me that his brother WAS sick yesterday

He will say that his brother will be sick.

He will inform me that his brother WILL BE sick tomorrow

2. HOWEVER, THE SECOND RULE IS OFTEN BROKEN.

Many learners do not realize that the words wouldd and could are the past tense of the verbs will and could.

There are, nevertheless, a few exceptions to this rule.

Galileo proved that the earth moves around the sun.

My mother told us that honesty is the best policy.

The professor told me that the Hindus burn their dead.

2. A subordinate clause expressing place, reason or comparison may be in any sense, according to the sense to be expressed.

He didn’t get the job because his English isn’t good.

A fishing village once existed where now you can see the city of Mumbai.

That person who once was a little girl in rags will be the new Prime Minister of Neverland.

3. If the subordinate clause is an adjective clause (a group of words that says something about a person or thing), it may be in any tense according to the sense of the sentence.

Yesterday I met a man who sells balloons.

Meaning: Selling balloons is his occupation.

Yesterday I met a man who sold me a balloon.

Meaning: I bought a balloon from him yesterday

Yesterday I met a man who will sell balloons at the supermarket.

Meaning: He has a plan for the future to sell to the supermarket.

3. THE THIRD RULE IS CLEAR AND EASY This is an easy rule but is important for English learners to learn. If it is not followed, the speaking or writing will be noticed as an error that only foreigners make.

subordinating clauses beginning with the words such as when, until, before, after, etc.

4. THE PERFECT TENSES Problems in sequencing tenses usually occur with the perfect tenses, all of which are formed by adding an auxiliary or auxiliaries to the past participle, the third principal part of the verb.

This tense is common not only in English but also in many European languages, such as French, Spanish, German, Russian, etc.

Present Perfect The present perfect tense consists of a past participle (the third principal part) with a form of the auxiliary verb “to have”It describes an action that began in the past but which continues into the present or whose effect still continues.

This implies or gives us the idea that she no longer teaches.

This implies or gives us the idea that she is still teaching.

The implication in (1) is that Betty has retired; in (2), that she is still teaching.

Peter bought cars and sold them. (simple past)

Peter sold cars that he had painted. (past perfect)

This clarifies that the cars were painted before they were sold.

Ray washed the car when Mary came. (simple past)

Ray had washed the car when Mary came. (past perfect)

This implies or gives us the idea that he had already finished washing the car by the time she arrived.

The future perfect tense designates an action that is expected to be completed at some set time in the future.

Friday I will finish my cooking for the party. (simple future

This simply states that I will finish on Friday.

By Friday noon, I will have finished cooking for the party. (future perfect)

5. THE TENSES IN CONDITIONAL SENTENCES

One part shows a result and the other shows a condition on which the result depends. The condition is normally

preceded by the word “if”. For example: “If he eats, he’ll get stronger.”

the result is “he’ll get stronger” and the condition

For example: “He got angry if he didn’t get what he wanted,”

the result is “he got angry” and the condition

There are two main types of conditional sentences: real

In the next section, you will see how a new writer of English makes a mistake with a simple real condition.

Unreal conditionals refer to situations that are untrue, impossible, or hypothetical; for this reason, conditional sentences of this type are often described as being “contrary to fact”.

We’ve already looked at real conditional sentences. Now let’s take a look at the unreal ones.

There are different types of unreal conditional sentences according to the time that they refer to. However, despite the time of the verb in the condition, the situations that they show are unreal, hypothetical, and contrary to fact.

The first type of unreal conditional is used for present and future time.

NOTICEIn these sentences, the condition is shown by the verbin the past tense, although the condition takes placein the present. The result usually has a form of the word “would”. Look at the example sentences until you see this clearly!

If I were a diplomat, I’d travel around the world.

I’d travel around the world if I were a diplomat.

(I’m not a diplomat, so I can’t travel around the world.)

If she were here today, she’d help you.

He’d help you if he were here today.

If the horse were smaller, I’d buy it.

I’d buy it if the horse were smaller.

If I had a passport, I’d travel around the world.

I’d travel around the world if I had a passport.

(I don’t have a passport, so I can’t travel around the world.)

If you asked him, he’d help you.

He’d help you if you asked him.

If governments protected human rights, their citizens would be happy.

Citizens would be happy if their If governments protected human rights.

(Many governments don’t protect human rights, so their citizens are not happy.)

But be careful! Some new writers use past tense of the verb in real conditional sentences. For example:

I must pass the test. If I didn’t pass it, that means I couldn’t take my major courses

. This is an unnecessary complication. Surely the new writer is confusing the rule of the past tense for unreal conditional sentences. I think that what she wanted to write was: “If I don’t pass the test, I can’t take my major courses. Everything is in the present and it wrote the same way we think about the condition.

1. In casual conversation and very informal writing, the word “was” is often used instead of were.

2. In unreal conditionals, the words “could” and

If I were a diplomat, I could travel around the world.

I might travel around the world if I were a diplomat.

If she were here today, she could help you.

He might help you if he were here today.

If the horse were smaller, I could buy it.

I might buy it if the horse were smaller.

3. If would show willingness, it may appear in both the condition and the result:

(She isn’t willing to study, so she probably won’t get good grades.)

If Shlomo would eat pork, we might ask him

(He isn’t willing to eat pork, so we don’t ask him to dinner.

4. Would not be used in the condition if it doesn’t refer to willingness:

If I would be young, I would have more energy.

Conditional Sentences An important place of the perfect tenses is in sentences that talk about possibilities and conditions. These are very important and have to be perfectly expressed in your writing. These expressions are formed with all the perfect tenses: the present perfect, the past perfect, and the future perfect.

An example that uses the present perfect.

If I had done my exercises, I would have passed the test.

The condition was doing my exercises. The result was passing the test.

An example that uses the past perfect.

I think George would have been elected if he had talked to the Press.

The condition was talking to the Press. The result was being elected.

An example that uses the future perfect.

If I am lucky I will have finished the job by December.

The condition is being lucky. The result is finishing the job.

Notice that the writer is thinking of December, and states that the ongoing job will be finished by December